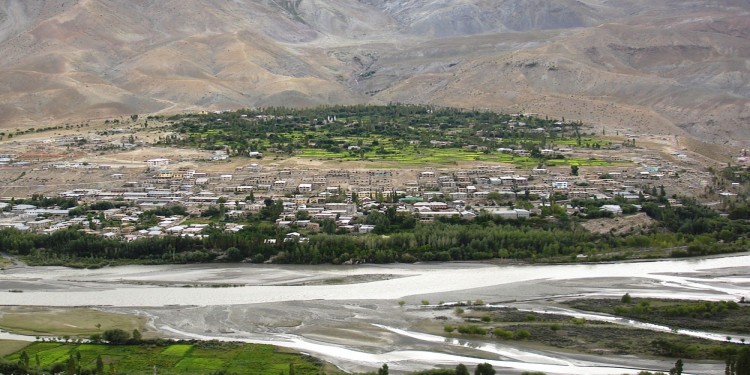 Kargil is a town, which serves as the headquarters of Kargil district of Ladakh in the state of Jammu and Kashmir in India. It is the second largest town in Ladakh after Leh. It is located 60 km and 204 km from Drass and Srinagar to the west respectively, 234 km from Leh to the east, 240 km from Padum to the southeast and 1,047 km from Delhi to the south.

Sightseeing of Kargil,
Suru Valley,
The Suru valley is a valley in the Ladakh region of Jammu and Kashmir, which is drained by the Suru River, a powerful tributary of the Indus river. The valley's most significant town is Kargil.The landscape of the Suru valley is wonderful, especially when it gets dotted by flowers in the summer. It expands from Kargil town upto the Penzi La watershed, from where the Suru river rises.The Suru valley has a large population, mainly of Tibetan-Dard Muslims, who converted to Islam in the 15th century. The beauty of the region is enhanced by the peaks of Nun (7,135m) and Kun (7,035m) Massif.
Mulbekh Chamba
Mulbekh, located 45 km east of Kargil is an area dominated by the Buddhists structures. Situated inside Mulbekh Camba is the 9 m high sculpture of Maitreya, the future Buddha and is a must see place to visit. The sculpture dates back to 7th and 8th century when Buddhist missionaries from east Himalayas came to this region.
Mulbekh Monastery
Mulbekh Monastery or Mulbekh Gompa is said to consist of two gompas, one Drukpa and one Gelugpa Buddhist monastery in the Zanskar region in the state of Ladakh in Jammu and Kashmir in northern India. The double gompas are dramatically situated at the very top of a crag 200 metres (656 ft) above the road. They were connected with the nearby palace of Rajah kalon of Mulbekh below. They may be reached by a steep footpath winding up from behind. The altitude of the town at the foot of the crag is given as 3,304 m. (10,839 ft), which makes the altitude of the gompas 3,504 m. (11,495 ft). Its population is given as 5,730.
Kargil Town
Kargil is nestled in the Himalayas, giving it a cool, temperate climate. Summers are warm with cool nights, while winters are long and cold with temperatures often dropping to -40 °C with recorded temperatures of -60 °C in Drass, especially in the tiny town of Drass which is situated 56 km from the Kargil town.The Zanskar plateau is even colder, thus making it a near-uninhabitable place for humans to stay, except for the hardy Khampas. The entire Kargil district is spread over 14,086 km². Kargil is a town, which serves as the headquarters of Kargil district of Ladakh in the state of Jammu and Kashmir in India. It is the second largest town in Ladakh after Leh.
Kargil war Memorial,
Kargil war memorial, built by the Indian army following the war with neighboring Pakistan in the late nineties is frequented by travelers plying the highway connecting Srinagar to Leh. The memorial houses some of the major sequence of events that happened during the course of the war along with details of the Indian army personnel, who sacrificed their lives in the process of recapturing some of the peaks occupied by the Pakistan army; like the Tiger Hill and Tololong.
Nun Kun Mountain
he Nun Kun mountain massif comprises a pair of Himalayan peaks Nun (7,135 m), the highest mountain on the Indian side of Line of Control in Jammu and Kashmir, and Kun (7,035 m) are located in the Suru valley. Kun, the lower of the two peaks is separated by a snowy plateau of about 2 miles is north of Nun. Pinnacle Peak (6,930 m), the third highest summit on the Nun Kun massif, was first claimed to be climbed by Fannie Bullock Workman in 1906. Most conveniently accessed from the Kargil to Leh road, located about 60 miles east of Srinagar, the capital of Kashmir.
Kargil Pensi La
Pensi La is much much colder. Pensi-la (Pensi Pass) is a mountain pass in the Ladakh region of Jammu and Kashmir, which is known as the Gateway to Zanskar. Pensi La is 4,400 m (14,436 ft) above sea level and connects the Suru Valley region to the Zanskar Valley region. The summit at this end of the Suru Valley, the only peak which can be seen, is 7,012 m (23,005 ft) high, while the mountain to the north is 6,873 m (22,549 ft). The pass is about 25 km from Rangdum Monastery.
Rangdum
At a distance of about 160 km from Kargil lies the Rangdum monastery. Located at an altitude of 3,657 meters, on the top of the mountain outcropping of rocks, the monastery structure gives more of an impression of an ancient fort that towers and safeguards the valley. The main highlight of the monastery is its central prayer hall with an amazing collection of Tibetan and other artifacts. A home to 40 monks, the monastery is an interesting place to pay a visit.