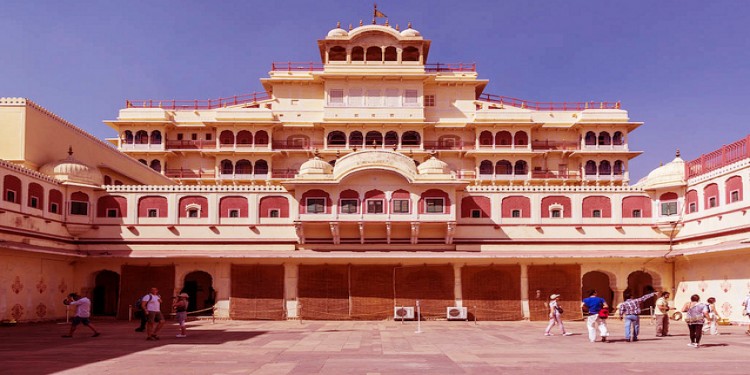 The City Palace is an imposing blend of traditional Rajasthani and Mughal art and architecture. The City Palace complex houses several palatial structures. In the heart of the old Jaipur city, the City Palace occupies a large area divided into a series of courtyards, gardens and buildings. Jai Singh built the outer wall but other additions were made much later, some right up to the start of this century. The former Maharaja still lives in part of the palace. The City Palace sprawls over one-seventh of the area of the walled city. It houses the Chandra Mahal, Shri Govind Dev Temple and the City Palace Museum.

The first building in it, is Mubarak Mahal, built by Maharaja Madho Singh. It has a beautifully carved marble gate with heavy brass doors on either side of this gate. Beyond this gate, lies the 'Diwan-E-Khas' or the 'Hall Of Private Audience' with a marble paved gallery. Across a paved square lies the 'Diwan-E-Am' or the 'Hall Of Public Audience', with its intricate decorations and manuscripts in Persian and Sanskrit. There is also a clock tower and the newer Mubarak Mahal.

CITY PALACE - situated in the heart of the old City, it occupies about one seventh of the old city area. The palace is a blend of Rajput and Mughal architecture, it houses a Seven storeyed Chandra Mahal in the centre, which affords a fine view of the gardens and the city. Diwan-E-Am (Hall of public audience) has intricate decorations and collection of manuscripts, Diwan-E-Khas (Hall of private audience) has a marble pawed gallery Mubarak Mahal has a rich collection of costumes and textiles. There is a Clock Tower near Mubarak Mahal. Sileh Khana has a collection of armory and weapons. Timing 9.30 to 16.45 hrs.