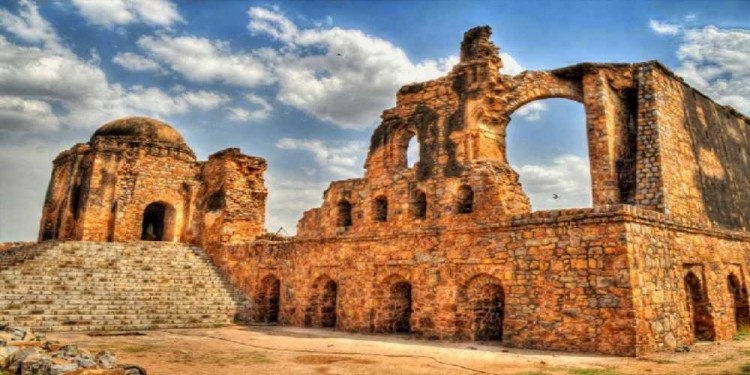 Firoz Shah Kotla is located between old Delhi and New Delhi. He ruled the city from 1351 – 1384. Muhammad Bin Tuglaq passed the throne to Firoz Shah Tuglaq in 1354. Later, he found the city Ferozabad.

The city and fort were built on the banks of the Yamuna River. Many other landmarks, like mosques, palaces, and madrasas, were built within the fort. Gardens were also created, which were rather lovely. He shifted his capital from Tuglaqabad to Ferozabad because of water supply issues in his previous capital.

The fort is built in the shape of a polygan, upon the Yamuna river in the east of the fort. The Fort was designed by Malik Ghazzi and Abdul Hakk. The fort is almost destroyed, yet people still visit it. The main gate and the exit gate have been destroyed.

The design was so beautiful, Sultan Taimur was so impressed. Later, after the defeat of the Tuglaq dynasty in 1490, the fort was abandoned by the people, and it was destroyed day after day. But still, people still visit the fort and find it amusing. Also, they also visit Jama Masjid, Baoli and Ashokkan pillars.

The Feroz Shah Kotla fort is also famed for the presence of jinns who grant people's wishes. According to the Islamic Mythology, jinns are made of smokeless fire, and people are made of clay. Jinns are thought to have same type of governance system as we human. People write their wish in the form of letter and paste it on the wall of the fort, they are writing the letter multiple times and paste it on each wall so that it can be delivered to the correct department. During the era, the fakir named laddoo Singh start living in the Fort so it made an increase the letter writing to the jinn. In front of Jinn everyone is equal, no one is superior. Whenever people visit the fort, they touch the railing of the wall, take a round of the fort so that their wishes can be true soon.

Things to Do at Firoz Shah Kotla Fort

The Firoz Shah Kotla Fort was built when the ruler found out the water is running out short, so he changed his dynasty from Tuglaqabad to Ferozabad. But the Fort is famous because the story it follows, the fort in which the jinn exist. People believe that if they write their wish on paper and put it on the wall the jinns gonna make their dream come true, also they try to touch the railing of the fort so their wish come true sooner.

Q1. How much time is required to visit the Feroz Shah Kotla Fort?

A1. You only need one to half an hour to explore all the place.

A2. One of the oldest fort was built by tuglaq dynasty. tuglaq shift his empire from tuglaqabad to ferozabad to supply water to its people.

A3. The fort was abandoned after tuglaq got defeated in the war, people leave the fort and no one is left to take care of the fort.