Jaipur is a great city and this is its most noticeable aspect. Buildings testify to it. Its Palaces, luxury hotels, ancient beautifully carved and painted Havelies pay homage to the grand capital of princes and kings, a city of the past that belongs to India's future.

HAWA MAHAL
Located at Sierh Deori Bazar, Hawa Mahal, literally the Palace of Winds, built-in 1799 by Maharaja Sawai Pratap Singh, displays fanciful architecture and is a remarkable landmark of Jaipur. So named because the palace has specially latticed screens and arches for an unbridled flow of the air currents but is a set pattern with the passage of the sun. Till the recent past, ladies of the court from within the palace positioned themselves by the balconies to watch processions passing through in the streets below without themselves being observed by the people.

JANTAR MANTAR
Emperor Sawai Jai Singh II, the builder of the city has to his credit five observatories in different parts of the country. The one he raised at Jaipur is the largest and best-preserved. Huge instruments in intricate masonry offer an accurate measurement of the time, the declination of the sun, the altitude and the azimuth, the position of constellations in the sky for the day, the eclipses and the allied astronomical phenomena.

CITY PALACE
This former royal residence is an imposing blend of traditional Rajasthani and Mughal architecture and craftsmanship. Surrounded by crenelated walls this piece-de-resistance of Jaipur palaces occupies one-seventh of the walled city, comprising a string of minor palaces and imposing halls, Of special significance is the Chandra Mahal which overlooks the breathtaking Jai Niwas Gardens and the highly revered Shri Gobind Dev Temple. The Museum within the palace has an array of galleries of rare paintings, exquisite miniatures, scholarly manuscripts, artifacts, and traditional treatises on architecture. The fine collection of guns and swords on display dates back to the 15th century and is one of the best in India.

JAL MAHAL
As its name denotes, this is a palace built amidst a lake and intended as the summer resort for the royal family. The palace is noted for its intricate architecture. 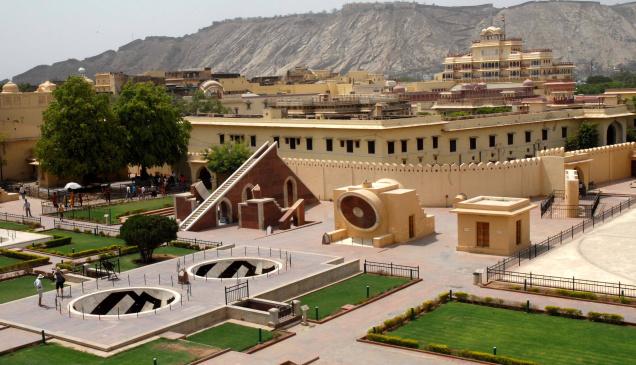 In earlier times, the entire complex was owned by the Minas and dedicated to Amba Mata, the incarnation of earth and fertility. Amber overlooks the Moata Lake and is rated as a marvel of bastion excelling in architectural and building skills. Amber had the distinction of being the capital for six long centuries before Jaipur came into being. A fascinating blend of Hindu and Muslim influences is distinctly discernible in its architecture. Amongst the most majestic of apartments is Jai Mandir or the Hall of Victory. The palace complex also boats of a Hall of Mirrors, the like of which is not seen in the country elsewhere. Sukh Niwas, the Hall of Pleasure, is a marvel of 17th-century engineering, its best feat being a unique system of air-conditioning. The model Operandi was based on a cool breeze blowing through a fall of cascading waters. To ascend the fort, jeeps and elephants can be hired near the entrance gate.

NAHARGARH FORT
13 km, a picturesque road winds its way up the hills. At one time, the fort was a retreat for the royal family. Nahargarh Fort commands a panoramic view from the top of the hill.