Most Luxurious 5-Star Hotels of Jaipur 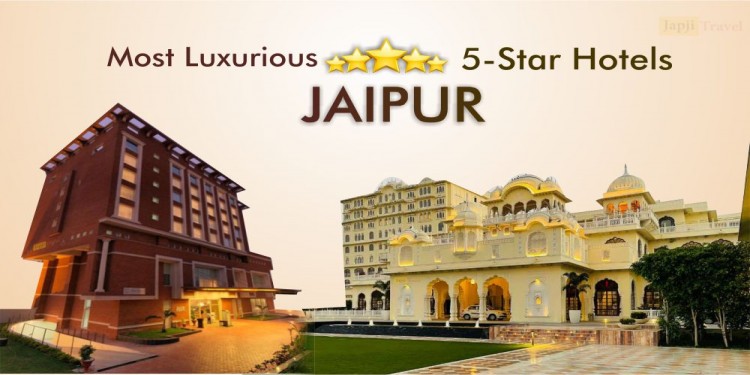 Most luxurious 5-star Hotels of Jaipur

Jaipur the city of Love, also known as pink City. It is the capital of Rajasthan. It is one of the most famous city between Tourist. Jaipur is one of the highest spirited city. It was discovered by Maharaja Sawai Jai Singh in 1727. The whole city was painted in Luke warm color to welcome our guest The prince of wales, Sir Edward Charles VII. Since then, the pink city maintained the rosy blush and retained his charm to attract tourist by the name of pink city of Jaipur.

Maharaja Ram Singh, also build the Ramgarh Lake to provide water to budding and prospering cities. Later the throne was taken by Man Singh II in 1922, and it was that time when the city was developing building like schools, secretariat and hospitals. After the Independence the combination of Jaisalmer, Bikaner, Jodhpur, Udaipur and many other cities combined together to make the biggest state of India called Rajasthan, as with capital Jaipur.

Jaipur has so much ancient history that it follows so it has an immensely tourist attraction, so because of the most famous attractive point of India, it is impossible that it doesn’t have luxurious hotel that didn’t attract tourist and couldn’t make their stay magnificent.

The most luxurious 5 star Hotels in Jaipur

Some of the best breathtaking 5 star hotels of Jaipur are mentioned below: -

This article shows the best 5 – Star hotels in Jaipur city, Rajasthan. The hotels are worth staying, the place and the ambiance are so exotic that it made you feel, the city comes to you to explore, you don’t need to go anywhere. These hotels give their best services with inclusion of so much activities, romantic dinners, spa, skincare, Rides, Safari, terrace pools, Party Rooms and many more. These are the best 5 stars’ hotels that should be added in your bucket list if you want to make your stay Royal in the Pink City.

Q1. Is the 5 – Star Hotels of Jaipur is worth visiting?

A1. Yes, 5 star hotels of Jaipur are one of the main tourist attraction of the city. The City has royal heritage hotels that gonna remind you the pink city, past history. They well maintained the Ancient Hotel with the blend of modern techniques.

Q2. Why are Jaipur 5 – Star hotels are so Expensive?

A2. The pink City is famous for its hospitality and cultural heritage. These hotels are very well furnished with luxurious décor and high attention of details. The rooms you get in 5 stars’ hotel is also quite big and include Stunning architecture, smart Bathroom, the amazing view from the window. You will get the royal treatment, and you will be get butler service which is going to be available for you 24*7.

Q3. Can I get the discount while booking a room in 5 star hotel?

A3. One of the best way to get the discounted luxurious hotel, book the hotel in advance. Hotels gives huge amount of deduction to whom who get the room booked early. In addition, you can check in their website, often they upload new types of offers.