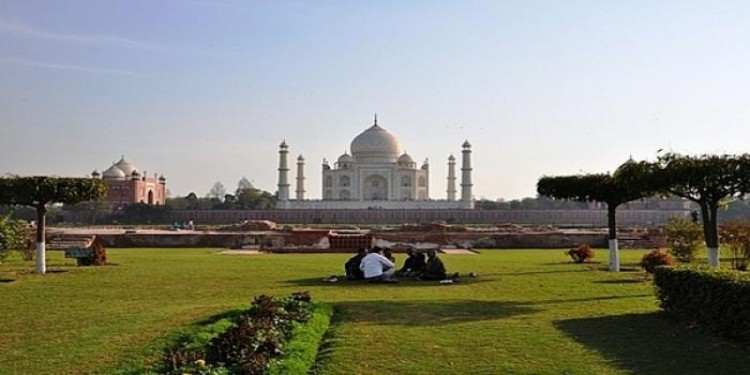 Day 01: Delhi
After pick up from the airport or station, you will be transferred to your hotel. Spend the day in knowing the some of the finest Mughal era architectures in the Old Delhi. The Gurudwara Bangla Sahib, is one of the most famous religious as well as tourist spots. To enjoy the awesomeness of old Delhi, visit the stone-cobbled paths of Chandani Chowk. One can roam about in this age old market on cycle rickshaw or walk through the old trails to get the essence of the city. The next stop is the largest mosque of Old Delhi, Jama Masjid which was built during the reign of Shah Jahan. Red Fort is another marvel of the emperor, which was built during 1639 to 1648, and has too many imperial stories related to it. Queen Haji Begum in the 16th century built Humayun Tomb which was supposed to be the prototype of the Taj Mahal at Agra. Roam around in the campus to see the magnificence of regal beauty. To pay homage to our country's brave freedom fighters, one can visit Raj Ghat which is a simple square platform of black marble. To witness an UNESCO World Heritage site, one can go to Qutab Minar which is a great example of Afghan Architecture. Since the time of Qutubuddin Aibak, since twelfth century, it is one of the architectural wonders. An “Arc-de- Triomphe” like archway in the middle of a crossroad stands India Gate which is a memorial for 70,000 Indian soldiers who lost their lives fighting for the British Army during the World War I.

Day 02: Delhi - Agra
Start the day early and take breakfast in hotel. Through Taj Express Highway or Yamuna Expressway, it takes around 3h 45min to drive up to 232.4 km. Spend the entire day to find out the beauty of this city which has too many places to visit. Agra is not only defined by Taj Mahal but also houses Fatehpur Sikri which is an epic Mughal structure built in red sandstone. Built by the Mughal Emperor Akbar during 1564 A.D., it is one of the signature architecture of the Mughal era. The Mughal Emperor Akbar commissioned the construction of the Agra Fort in 1666, A.D. Its mesmerising history with regal exteriors and majestic interior architecture still stands elegantly. Diwan-I- Am, Diwan-I- Khaas, Musamman Burj are some of its major parts within the Fort. Built by Mughal Emperor Shahjahan as a memorial to his beloved wife Mumtaz, visiting Taj Mahal will tell you why it is one of the World's wonders.

Day 03: Bharatpur Bird Santuary
The best time to visit Bharatpur Bird Sanctuary is August – November for watching resident birds and October – March for spotting migratory birds. it is open from  6 am – 6 pm during the summer so one can start the day early. Also known as Keoladeo National Park, Kadam, Jamun and Babul trees cover a major portion of the north-east region of the park apart from which the rest of the vegetation is also equally enchanting to experience. Bird safari makes for the most surreal experience at Bharatpur Bird Santuary. Spread over 29 sq km with well laid-out forest trails, one can avail the trip from 8 am – 5 pm.

Exhibiting the right blend of Mughal and Rajputana architecture, the Bharatpur Palace is also one of the nearby places to appreciate the 2nd-century art and workmanship.

Drive to Jaipur from Bharatpur Bird Santuary which takes around 2h 54 min and covers a distance of 183.4 km via NH21.

Day 04: Jaipur
Start the day early to visit the capital city of Rajasthan. This city was established in 1727 by Jai Singh II and has some of the finest works of architecture of the Mughal and Rajput era. City Palace is one of the best places to visit in Jaipur. Built within 1729 and 1732 AD, this palace has the royal architecture.  On one part of the palace is a museum, which exhibits the royal remains of Rajputanas. Amer Fort, or as some refer to as Amber Fort, is a town with an area of four square kilometres. The entrance is through Suraj Pol which will lead to Jaleb Chowk. The imposing stairway leads to Siladevi Temple. The intricate designs and work of art can be found in parts of the fort such as Diwan-i-Am, The Jai Mandir,  Sukh Niwas. Jantar Mantar is also another place to visit in Jaipur. It has nineteen architectural astronomical instruments and is still a fascinating place for the science lovers. Hawa Mahal, or as referred to as 'Palace Of The Winds' is a signature building of the city and can be admired from the road only.

Day 05: Jaipur - Delhi
Start the day after taking breakfast in the hotel. Drive about 268 km and takes around 5 hours to drive via NH48

5 Star Hotels With Breakfast, Taxi Service, All Sightseeings and Transfer as Per Itinerary, Guide Service
Discount 10% | Save 3200