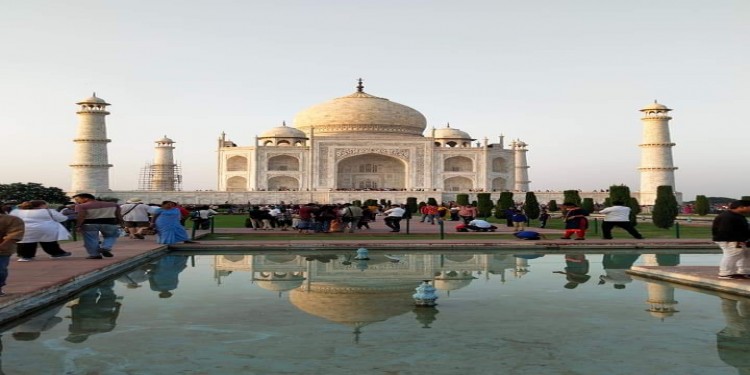 The most beautiful building in the world. In 1631 the emperor Shah Jahan built the Taj Mahal in memory of his wife Mumtaz, who died in childbirth. The white marble mausoleum at Agra has become the monument of a man's love for a woman.

Shah Jahan came to power in 1622 when he seized the throne from his father, while murdering his brothers to ensure his claim to rule. He was known as an extravagant and cruel leader. But he redeemed himself by his generosity to his friends and the poor, by his passion in adorning India with some of its most beautiful architecture, and by his devotion to his wife Mumtaz Mahal - "Ornament of the Palace." He had married her when he was 21, when he already had two children by an earlier consort. Mumtaz gave her husband 14 children in eighteen years, and died at the age of 39 during the birth of the final child. Shah Jahan built the Taj Mahal as a monument to her memory and her fertility, but then relapsed into a life of scandalous behavior. This tomb was only one of hundreds of beautiful buildings that Shah Jahan erected, mostly at Agra and in the new Dehli that came into being under his planning.

Morning By 7 am Pickup From Delhi Airport Or Station and Drive To Taj Mahal Agra
Reach Taj Mahal By 11 am, On arrival our guide will meet you in Agra and take you to taj mahal
Visit taj mahal till 1 Pm
After that Go to local restaurant for lunch
Then Go to Visit Agra Fort and Spend 1 Hour
After That drive to Sikandra Fort with Our guide and driver
Evening You have 2 hours spare to visit Agra Local Markets
By 6 Pm Drive Back to Delhi, On Reach transfer to Airport Or Station