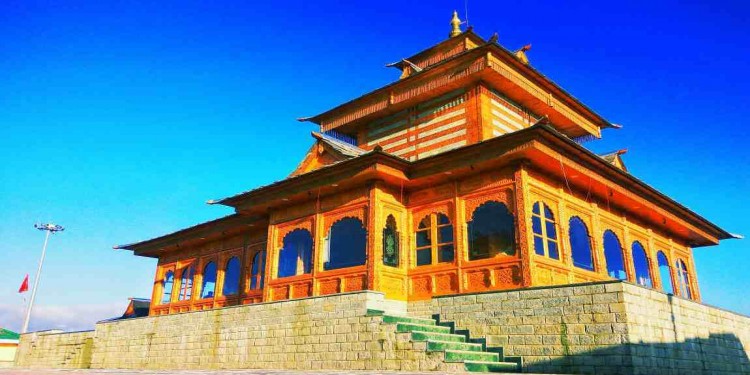 The Tara Devi Temple is located at a distance of 11 km from Shimla on the Shimla – Kalka National Highway. The temple is dedicated to Goddess Tara and stands on Tara Devi hilltop between Shimla and Shoghi and is a very popular visiting spot for tourists and devotees.

The temple was built over 250 years ago and holds a great spiritual value for devotees. There is a belief that Goddess Tara was brought to Himachal Pradesh all the way from Bengal. It is believed that a king from the Sen Dynasty had a locket which contained a small gold idol of his family deity, Goddess Tara. He visited this area over a hundred years ago wearing the locket tied around his upper arm. The idol remained encompassed and passed on through the many generation of the Sen Dynasty. But during the 96th generation dynasty, King Bhupendra Sen had an unusual vision near the current location of the temple, while he had been hunting, of his family deity Tara Devi along with her Dwarpal Bhairav and Hanuman Ji, expressing the need to be unveiled before the people, to bless and be prayed to. He, at once donated around 10 acres of land and had a temple constructed there to honor “Ma Tara” and her wishes. A wooden idol of the goddess was installed and later on another king from the same dynasty, Raja Balbir Sen had another vision of the deity expressing her desire to be installed on the Tarav Parvat, and to honor her wishes he had another idol of Tara Devi made of Ashtadhatu, in his capital of Junga and carried it on an elephant “Shankar” to the hill top and had it installed in the 1825.

The main attraction of the temple is it seclusion from the normal noise and pollution, traffic of the cities and towns. The Tara Devi Temple has tranquility and a sense of peace and relaxation in its atmosphere because of how its located away from everything, standing alone and serene. There are big precessions and celebration held at the temple during the Navaratras and Ashtami.

To one side of the Temple you can see the beautifully snow-capped Himalayas and the town of Shimla while on the other side you can see the tremendously green and beautiful plains that spread out vastly between the mountains.