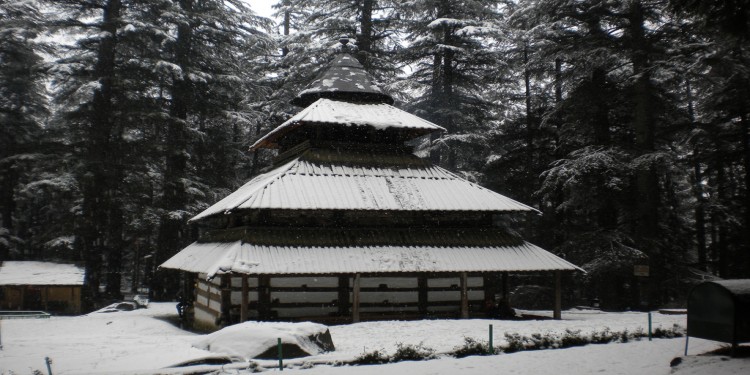 Beautiful hill station Manali in the state of Himachal Pradesh is not only a home to beautiful and romantic attractions, but it also have a deep devotional enthusiasm that is provoked by most devoted temple named Hadimba temple Manali. A pagoda shaped roof, front doorway covered with figures and symbols, amazing and intricate woodcarvings with cover to the pillars, door posts, lintels, etc names a few that are enough to describe the deep enthusiasm of devotees towards Hadimba temple Manali.

At the same time, deep pine forest ranges near old Manali symbolizes that you have in the lap of Mother Nature where Mother Goddess of the valley or Hadima Devi has left a lot of spirituality. Hadimba temple Manali that is dedicated to goddess Hadimba hold a very devoted history.

Constructed by Maharaja Bahadur Singh in 1550 AD, Hadimba temple Manali is a much revered deity of the locals where the Goddess regularly consulted in times of natural hardship or calamity. According to locals and legendary related to temple, animal sacrifices are still made here in her honor. They further remarks that the Hadimb, the brother of Goddess used to rule some of the sub-mountainous tracts here. And at that time, Hadimba fell in love with most powerful Bhima who was one of the Pandava brothers. It is said that Pandavas happened to step into the territory of Hadimb having escaped the wax house unhurt. Later on Hadimba's request, Bhima killed Hadimb and married to her. However, they lived together for one year and during the course of time Hadimba also gave birth to a son who later famous as Ghatokachh.