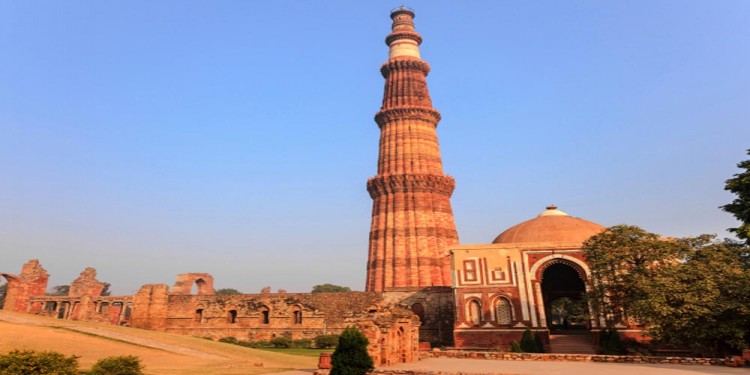 Qutub Minar is an outstanding Redstone minaret constructed in the 13th century inside the Qutub Complex. It represents a remarkable testimony of Islamic artistry and Mughal architecture. Some historians believe that the minaret was erected as a tower of victory to signify the beginning of Muslim dominion in India. Others consider it a place of worship where the faithful muezzins called prayers.

Over the centuries, the tower has been repaired, rebuilt, and restored by different rulers. As it stands today, the fluted sandstone tower has projecting balconies and extensive marble inlays with richly carved inscriptions from the holy book of the Quran.

Qutub Minar is open for public 7-days a week. You can visit the Qutub complex between 7 am to 5 pm. However, the best time to visit the tower is early morning or evening when the temperatures are low; and the ambiance is favorable for sightseeing and leisurely walks.

Further, the complex gets a little overcrowded during weekends. Therefore, we advise you to plan a trip to Qutub Minar during weekdays and explore every aspect of the magnificent monument at your own pace.

In the winter season is best to visit Qutub Minar when the weather is pleasant with low temperatures. Plan your trip to Qutub Minar from October to February to avoid the unbearable and scorching heat of the sun. Capture the sight of the enormous tower illuminated by the golden light of the setting sun during a chilling winter evening.

Things To Do in Qutub Minar

Qutub Minar is a part of the Qutub Complex, including the Alai-Darwaza, Quwwatu’l-Islam mosque, and other funerary buildings. Here is a list of things you can do while exploring the Qutub Complex:

There are numerous Tourist Guides available to show you around the area's various structures. They will be paid a fee and will be able to tell the history in a variety of languages, including English and Hindi.

Q1. Why is Qutub Minar popular?

A1. Qutub Minar is the tallest brick minaret in India, listed as a UNESCO World Heritage Site. It is 73 meters high with Brahmi and Arabic inscriptions.

Q2. How Can I reach Qutub Minar?

A2. You can easily reach Qutub Minar by auto-rickshaws, cabs, and private cars. It is at a walkable distance from the metro station. Bus services are also available en route. If you are self-driving, you can reach Lodhi Sarai via Sri Arbondo Marg to visit Qutub Minar.

Q3. Do I need to purchase any tickets to enter Qutub Minar?

A3. Yes, you need to purchase entry tickets priced at INR 35 for Indians and INR 550 for foreign visitors. Children up to the age of 15 years can enter for free. You may need to show your identity card at the entry gate.