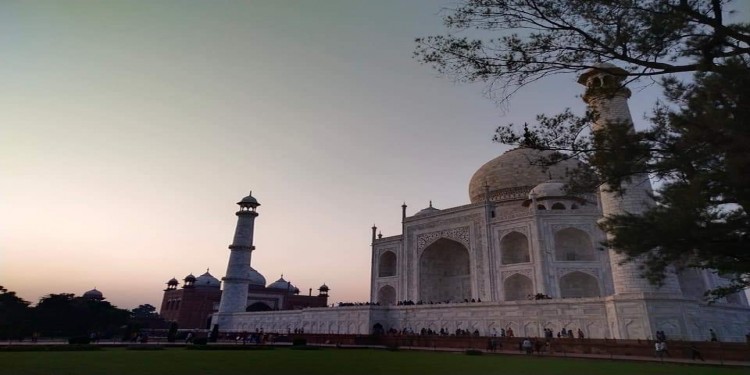 Day 01 : Reach Jaipur Airport in the morning and Arrival with your Name board

From the Airport of Jaipur, you will be taken to a pre-booked hotel by our tour representative. Later, you can proceed for Jaipur local Tour.

Proceed for the sightseeing of excursion to see the largest cannon on wheels in the world, and old cannon foundry at Jaigarh. Visit to the Kanak Vrindavan Temple in the valley of flowers. Drive through the Johari Bazaar or the old jeweler's market to Hawa Mahal (Palace of Winds). Visit the various museums inside the City Palace and the ancient observatory, Jantar Mantar.

Day 03 :  Jaipur - Ranthambore.
After breakfast, departing from Jaipur to Ranthambore. Around 4 hrs drive on the way visit Sawai Madhopur City and have lunch or Coffee break in any of a hotel / Resort / Restaurant and after another 01 hour drive check in to the Ranthambore hotel.

Day 05 : Ranthambore - Agra
After breakfast depart from Ranthambore to Agra and it will be around 7 hrs drive

On the way visit Fatehpur Sikri, an ancient capital of Mughal kingdom.Visit  Buland Darwaza, or the "Door of victory", was built in 1601 A.D. by Mughal emperor Akbar to commemorate his victory over Gujarat. It is the main entrance to the Jama Masjid at Fatehpur Sikri, which is 35 km from Agra, India. Buland Darwaza is the highest gateway in the world and is an example of Mughal architecture.

After Visit drive from Fatehpur Sikri you will reach Agra hotel.

By evening you may proceed to Mehtab Bagh

Taj Mahal, which is widely regarded as the world's most beautiful building, is located in Agra's historic city. It was built for his third wife, Mumtaz Mahal, by the Mughal Emperor Shah Jahan. Built in the 17th century entirely of white marble, It is one of Mughal's finest buildings. Recognized as a World Heritage Site by UNESCO, this site is also considered one of the modern world's seven wonders. Shah Jahan said "the sun and the moon shed tears from their eyes" about the Taj.

Covering an area of approximately 42 Acres, the Taj Mahal was constructed using white marble obtained from Makrana in Rajasthan. The Taj has done equally splendid artistic work in the interiors, which is so majestic from the outside. In the entrance there are water channels and fountains that make the monument even more spectacular. The reflection in the Yamuna of this glorious spectacle is in its beauty almost romantic!

After Taj hotel visit, you may go back to your Hotel for Refreshment/Lunch and take a rest till evening.

By evening, after the Hot Sun reduce its warmest rays, you may proceed to Agra Fort.

Agra fort an Overview
An architectural masterpiece was designed by Emperor Akbar in 1573, The Red Fort of Agra or Agra Fort. It is, in reality, a huge fortification located in Agra, Uttar Pradesh, on the right bank of the Yamuna River and made entirely of red sandstone. The fort was once the Mughals ' first-time residence until 1638. One of the UNESCO World Heritage Sites is 2.5 kilometers away from another modern world wonder-The Famous Taj Mahal. The Agra Fort area is so large that it is often called a walled city. This imposing structure, made of red sandstone brought from Rajasthan to Agra, is as majestic as it is beautiful and delicate.

Agra Fort, one of the Mughals ' most special monuments, has richly decorated buildings. It is the perfect example of Mughal art and architecture style and is one of Agra's most popular tourist spots. This vast architecture, built purely from red sandstone, stands out against the sky's soft azure. The most elegant Mughal buildings such as the Pearl Mosque, Diwan-i I Khas, Diwan-i I Aam, Moti Masjid and Jahangiri Mahal are situated inside the fort's premises. Each and every one of these buildings have outstanding handicrafts and decorations that make this place a delight for all lovers of history and architecture. From the Agra Fort you can also get a magnificent view of Taj Mahal!

Day 07 : After the breakfast proceed to Delhi – The Capital City of India

Delhi, India's center, is a rich blend of culture, religion, and architecture. For many great emperors, this imperial city has been the first choice since time immemorial. Delhi, a lively city on the banks of the Yamuna River, boasts massive colonial houses, temples, museums, malls, skyscrapers, galleries and gardens. The city experienced many dynasties ' rise and fall, and their glory is spoken of by the ruins of those ages. It makes it town a perfect and most attractive destination for visitors. Delhi's lip-smacking food and lively markets are also renowned. There's plenty to do in Delhi for a visitor, and you need at least 3-4 days to visit its main tourist spots.

India Gate
India Gate was built in 1921 under the supervision of the Duke of Connaught at a height of 42 meters. The cornerstone of this memorial was laid by Sir Edwin Lutyens to honor the 70,000 Indian soldiers who sacrificed their lives during the First World War fighting for the British Army. On this war memorial there are names of over 13,000 Indian and British soldiers who were killed in the Afghan War of 1919. It is a very popular spot among domestic and international tourists, surrounded by lush green lawns. As people in huge numbers visit these lawns, the evenings and nights at India Gate become vibrant. In the popular boat club, you can also enjoy boating here.

Rashtrapati Bhawan
The Rashtrapati Bhawan (Presidential Palace), formerly known as Viceroy's House during the British Empire, is an architectural marvel opposite the India Gate.The building is the Indian president's official residence sprawling on a 200,000 sq floor area. Ft with 4 floors and 340 spaces. Designed by world-renowned architect Sir Edwin Lutyens, on January 23, 1931, she saw her first occupant, Viceroy Lord Irwin. After India gained independence in 1947, it was renamed Government House. It was only in 1952 when Rashtrapati Bhavan was given its new name. Rashtrapati Bhavan's back is protected by Mughal Gardens, a collection of beautiful gardens designed by the Mughal emperors. In February each year, these gardens, one of Delhi's biggest attractions, are open to the public.

After the breakfast continue the City Tour…

Qutub Minar
The minaret with a diameter of 14.32 m at the base and 2.75 m at the top is India's tallest building. Qutbu'd-Din Aibak (of the Slave or Mamluk Dynasty) commissioned its construction in 1199 AD, completed by his successor and son-in-law, Shamsu'd-Din Iltutmish. The five-story minaret projecting balconies, which is listed as UNESCO World Heritage Site, is made of red and buff sandstone. It has various inscriptions in different places in Arabic and Nagari characters. The Qutub Minar compound consists of the mosque of Quwwat-us-Islam, the pillar of 7 meters high iron, the tomb of Iltutmish, Ala'i-Darwaza and Ala'I Minar.

Humayun’s Tomb
Hamida Banu Begam, India's second Mughal ruler Humayun's widow, commissioned the tomb to be built in 1569, 14 years after his death. The tomb is built in Persian style and showcases the finest example of Persian architect Mirak Mirza Ghiyath's architectural brilliance. Arched alcoves, hallways and the high double dome represent the power of Persia when touching Indi It was the first garden tomb on the Indian subcontinent to have the tombs of various Mughal rulers. Designated as a UNESCO World Heritage Site, this is where the last Mughal Emperor Bahadur Shah Zafar took refuge during the 1857 rebellion. For Indian filmmakers, the monument was a hot favorite where the shooting of many films took place.

Red Fort
Built under the aegis of Mughal Emperor Shah Jahan, the Red Fort has served for more than 200 years as a palace for Mughal emperors. The fort, a UNESCO World Heritage Site, derives its name from the red stone used in its construction. The building of the Red Fort began in 1639 after Shah Jahan moved his capital from Agra to Delhi and laid Shahjahanabad's foundations in 1638. It took almost nine years to complete it. Designed in Indian, Persian and European architecture, the magnificent building gives it a unique touch. The Red Fort complex comprises halls of audience, imperial residences, main gates, walls, and walls. Diwan-i-Aam (Public Hall), Diwan-i-Khas (Private Hall), Rang Mahal (Color Hall) and Moti Masjid (Pearl Mosque).

Jantar Mantar
Built in 1724, on the order of Mughal Emperor Muhammad Shah, this observatory was built by Maharaja Jai Singh II of Jaipur. It was used for compiling astronomical tables and forecasting sun, moon and planet times and movements. There are three instruments in the observatory-Samrat Yantra, Jai Prakash Yantra, and Misra Yantra.

After Finish Day Sightseeing of Delhi. You will transfer to Delhi airport for your onward journey to your home