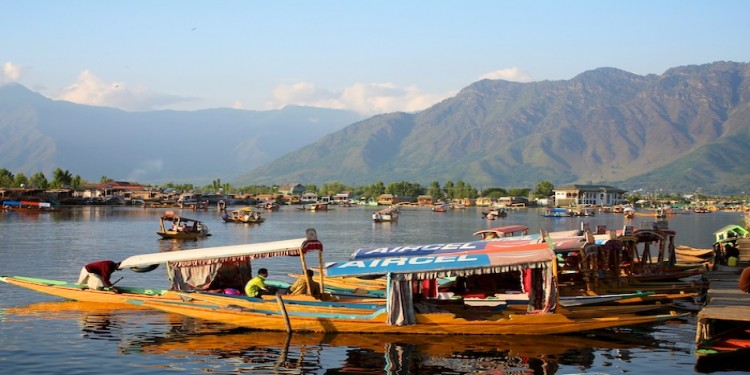 Located in the northern part of the Indian subcontinent, Jammu and Kashmir is possibly the most beautiful state of the country. Outlined by the westernmost Himalayan mountain ranges, the Karakoram Range, Kashmir was formerly one of the largest princely states of India. Rising from about 2,000 to 7,000 feet, the state starts from the foothills of the Himalayas and is adorned by the paradisiacal beauty of the floral and vegetation extent.

Tourism has always been one of the crux points of economy for Kashmir. Jammu and Kashmir state became the territory under India after Hari Singh, maharaja of Kashmir signed the Instrument of Accession in October 1947. Unfortunately, since Independence, this state has perennially been the apple of discord between India and Pakistan. However, that has not deferred the state's potential as a major tourism zone. The untapped natural beauty of the place is what attracts tourists from the country and beyond.

Located at an altitude of 1,730 m, Srinagar is in the heart of the Kashmir valley and is spread across both the sides of river Jhelum.  Its picturesque setting has been the prime reason to call for the tourists in every season.  The salubrious climate adds to the attraction of the tourism. The present city of Srinagar was founded by Pravarasena-II and in the Mughal era Akbar captured the valley.

The state is well connected by airways and there are daily flights to Srinagar from Delhi, Mumbai and Jammu. The nearest railhead for Srinagar is Jammu Tawi which connects the metropolitan cities. National Highway 1-A is a well developed road track and connects this northern-most state to the rest of the country.

Tourists flock from every nook and corner of the country to stay in Srinagar. This unique floating experience is only available in Kashmir. The cedar-panelled rooms with the intricately carved out furniture designs make the ambience look nothing less than majestic. Moored along sections of the Dal Lake and the Nagin Lake, the houseboats are the epitome of luxury stay. The Department of Tourism has graded the houseboats varying in their degree of comfort and luxuriousness. While some of them overlook the main road, the luxuriousness opens to lotus gardens and some yet another stands right in the middle of the lake.

However, irrespective of the luxury category, all the houseboats offers personalized service and have a houseboy for every boat. Some of the houseboat packages include free rides to the closest jetty.

A balcony, dining room, a lounge, pantry with three or more bedrooms and bathroom - these are the standard sections of any houseboat. Deluxe, A, B, C and D are the four different classifications according to The State Tourism Department and there are 1087 registered houseboats of which 702 are anchored in the Dal Lake.

One of the most beautiful hill stations in Srinagar, Gulmarg translates into "a ground of flowers". Apharwat Peak is one of the most attractive points of Gulmarg and is a preferred destination for the adventure tourists. This peak is situated near the Alpathar Lake and is one of the majestic points to view sunset.  The well-bred horse paddocks along the lush green surroundings makes the place a choiced destination for honeymoon couples as well. Tourists can go to Ningle Nallah, a glowing mountain stream originating from the Apharwat peak and can cross the river through a viaduct which ends in Khilanmarg. Heli-skiing, skiing, trekking etc. are some of the popular adventure tourism sports.

Located on the Srinagar-Ladakh Highway, Sonamarg- the meadow of gold is known for its Thajiwas Glacier. The trail is generally travelled on car. There is also the scope for hiking up to the glacier and back and it generally takes five hours. For those who do not want to take a taxi can opt for the pony ride.

Pahalgam is the other much commonly visited valley which is about three hours drive from Srinagar. Pilgrims going on the Amarnath Yatra have to take this path and for those not interested in the pilgrimage are better advised to avoid the route during July.

Sinthan Top became popular after Kokernag-Sinthan Top-Kishtwar Road, connecting Kashmir with Jammu started their construction and now, it is possibly the most populous tourist spot of Kashmir. The drive from Srinagar to Sinthan Top takes around two and a half hours and tourists generally halt overnight in Daksum.

Indira Gandhi Memorial Tulip Garden was opened in 2007 and is the largest Tulip Garden in Asia. This breathtaking landscaping project makes one’s eyes riveted by looking at the parallel tracks of multi-coloured tulip flowers. Red, orange, yellow, mauve- the colours reflect the heavenly image of the place. Fruit trees encircle the rim of this garden. At the backdrop of the garden stands the Pari Mahal. The striped mosaic of tulips are beaded with floating fountains.