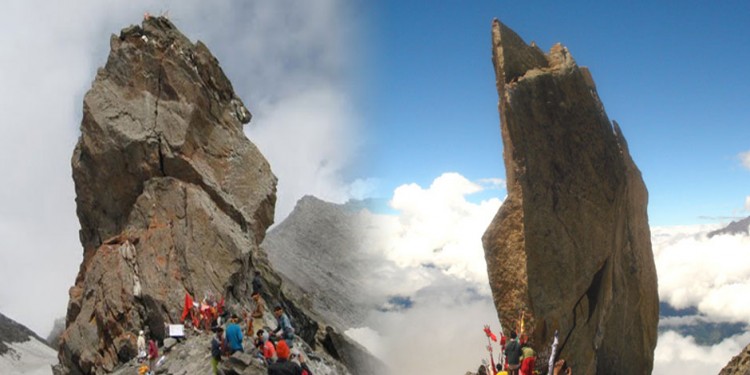 Kinner Kailash' is considered winter residence of Lord Shiva. It is said that Lord Shiva conduct a meeting of all Devi-Devtas on Kinner Kailash Top in month of January. A person has to take yatra to the Top of Kinner Kailash & also parikrama is done. Kinner Kailash Parikrama or Charang Trek takes us to Kinnaur, the land of fairy tales and fantasies. Kinnaur Kailash or Kinner Kailash as it is popularly known is a 6500 m high mountain peak. It is a sacred peak both for the Buddhist Kinnauris and Hindus. The mountain range of Kinnaur Kailash forms the border of Kinnaur District towards the south The landscape of the area varies from the lush green orchards of the scenic Sangla Valley to the stark magnificence of the Hangrang valley. The massive snow clad ranges that provide a regal dignity to the scene are dominated by the peak of Kinner Kailash.