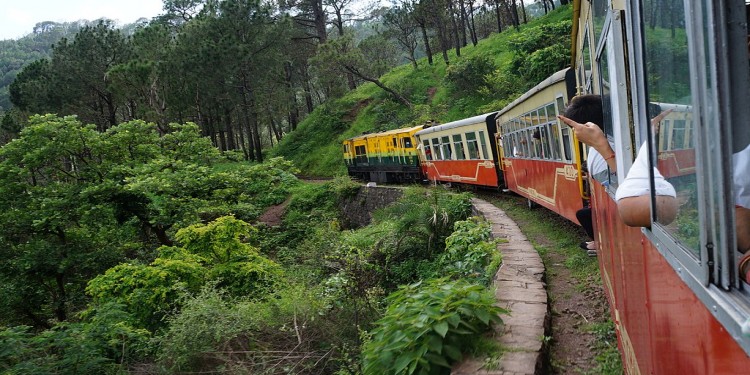 The Kalka-Shimla Railway built to connect, the summer capital of India in 1903 at an altitude of 2076 meters offers a panoramic feast to experience the grandeur of the picturesque Himalayas from the shivalik foot hills at Kalka to several important points such as Dharampur, Solan, Kandaghat, Taradevi, Barog, Salogra, Summerhill, Shimla and beyond up to the silvery snow line near the towering peaks.

The 96.54 kilometer line, built on a 2 feet six inches gauge, was opened for traffic November 9, 1903.Because of the high capital and maintenance cost, coupled with peculiar working conditions, the Kalka - Shimla Railway was allowed to charge fares that were higher than the prevailing tariffs on other lines. However, even this was not good enough to sustain the company and the Government had to purchase it on January 1, 1906.
Spectacular scenery along the whole route, and the marvels of it's construction, keeps the traveler on this line spell bound. On leaving Kalka, 656 meters above sea level, the railway enters the foothills and immediately commences it's climb.
Kalka-Shimla-Railway runs through 102 tunnels, some of which have hoary tales to tell. For instance, the longest tunnel at Barog, named after the engineer in charge of construction, bears the blood of it's creator who apparently committed suicide after making a mistake in laying the alignment. This tunnel is 1143.61 meters long and remained the second longest tunnel on Indian Railways for a long time. It is a straight tunnel, passing through fissured sand stone.