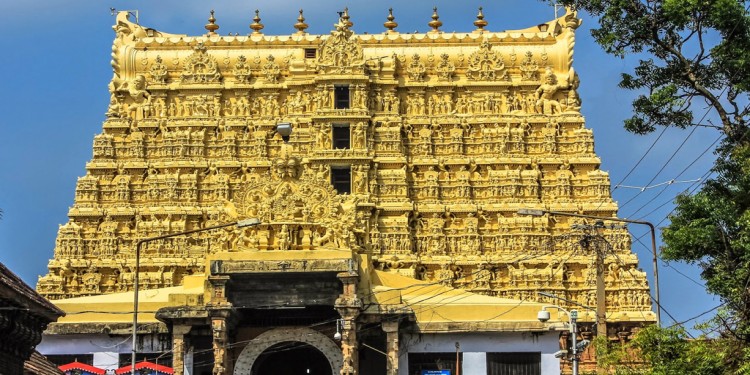 Located inside the East Fort in Thiruvananthapuram, the capital city of the State of Kerala. The origin of the Temple of Sree Padmanabhaswamy is lost in antiquity. It is not possible to determine with any exactitude, from any reliable historical documents or other sources as to when and by whom the original idol of Sree Padmanabhaswamy was consecrated.

This temple is a blend of the Kerala and Dravidian styles of architecture. In 1758, during the reign of Sree Karthika Thirunal Rama Varma, the fabulous Kulasekhara Mandapam was build. It is a marvelous and fantastic architectural work on stone. It is also known as Aayiramkal Mandapam and Sapthaswara Mandapam. It is supported by 28 balustrades of pillars. The pillars on the four corners can produce musical notes when taped.
Only Hindus are permitted inside the temple.
There is a strict dress code that needs to be followed while entering the temple. Men need to wear mundu or dhoti (worn around the waist and going down up to the heels) and should not wear shirts of any kind. Women need to wear sari, mundum neriyathum (set-mundu), skirt and blouse, or half sari.