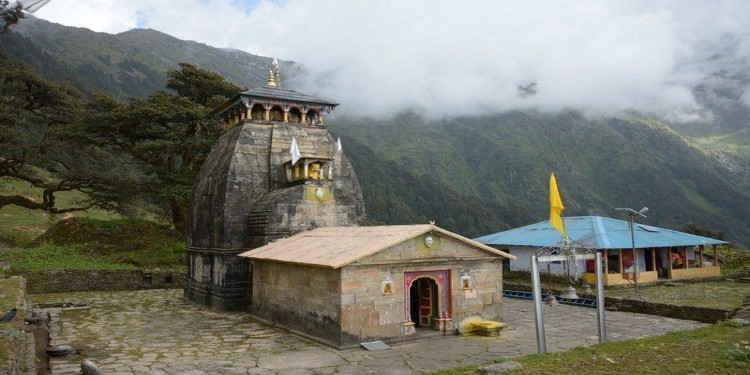 Madmaheshwar is a Hindu temple dedicated to god Shiva, located in the Mansoona village of Garhwal Himalayas in Uttarakhand, it is the fourth temple to be visited in the Panch Kedar pilgrimage circuit, comprising five Shiva temples in the Garhwal region. The other temples in the circuit include: Kedarnath, Tungnath and Rudranath to be visited before Madmaheshwar and Kalpeshwar to be visited after Madmaheshwar.The middle (madhya) or belly part or navel (nabhi) of the bull, considered a divine form of Shiva, is worshipped at this temple, believed to be built by the Pandavas, the heroes of the Hindu epic Mahabharata, The temple in the north Indian style of architecture, is situated in a lush meadow, just below a high ridge. The older, so-called 'Vriddh-Madmaheshwar', temple is a tiny blackened shrine on the ridge, which looks straight up at the commanding Chaukhamba peaks.