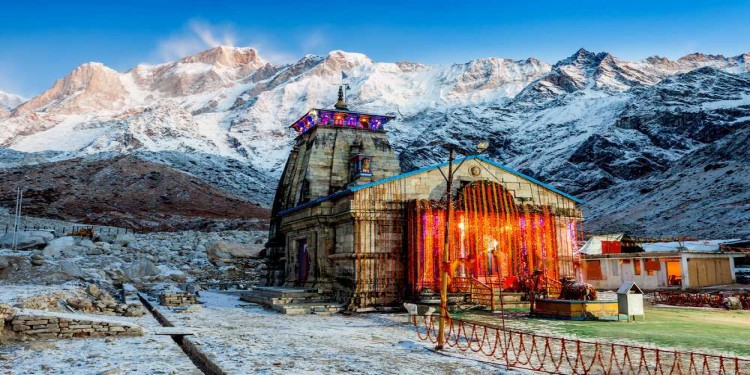 Kedarnath Mandir (Kedarnath Temple) is a Hindu temple dedicated to god Shiva. It is on the Garhwal Himalayan range near the Mandakini river in Kedarnath, Uttarakhand. Lord Shiva manifested in the form of Jyotirlingam or the cosmic light. Kedarnath is highest among the 12 Jyotirlingas. This ancient and magnificient temple is located in the Rudra Himalaya range. This temple, over a thousand years old is built of massive stone slabs over a large rectangular platform. Due to extreme weather conditions, the temple is open only between the end of April (Akshaya Tritriya) to Kartik Purnima (the autumn full moon, usually November).

The unstable temple is not directly accessible by road and has to be reached by a 14 kilometres (8.7 mi) uphill trek from Gaurikund. Pony and manchan service is available to reach the structure. The temple was built by Pandavas and revived by Adi Sankaracharya.Outside the temple door a large statue of the Nandi Bull stands as guard.
The ideal time or peak season to go for a Char Dham Yatra is from May to October, except monsoons. This is because; all the four sacred sites are perched in Garhwal Himalayas, which is prone to heavy snowfall. As a result, all the passage leading to the shrines are blocked. Moreover, during the monsoon season, there is undue threat of having landslides, which can further disrupt the journey.