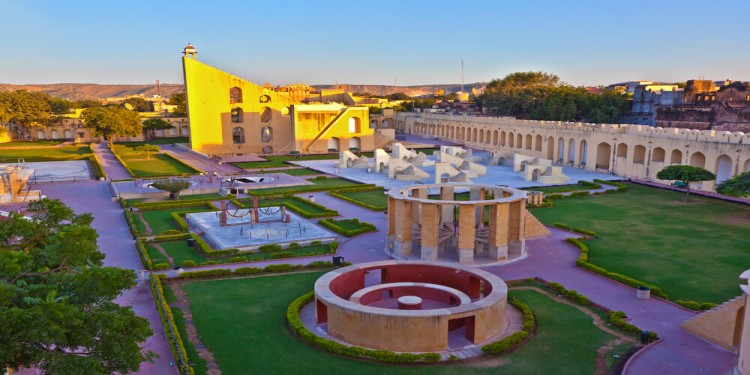 Man has always been fascinated by the Universe and the Cosmos. With every passing year, we think we have come closer to unfolding the secrets of the dark skies. But just as we think we are close to discovering the key or the knowledge, we realize we haven't even crossed the threshold yet. Even our ancestors and the people before us, could not resist the temptation and made attempts to learn more about the mysteries of Time and Space.

When is the best time of day to visit Jantar Mantar?

The best time to visit Jantar Mantar in Jaipur is at midday. At noon, the Sun is vertically above, making interpreting the readings of each instrument simple.

What are the best months to visit Jantar Mantar?

With hot summers from April to September, the best months to visit Jaipur's Jantar Mantar are October to March. The pleasant weather allows you to stroll around the structures and call other nearby monuments.

What are the main secret spots of Jantar Mantar?

Maharaja Sawai Jai Singh II built five similar observatories throughout the country, including the Jantar Mantar in Jaipur, Mathura, Delhi, Ujjain, and Varanasi. The Jaipur observatory, Jantar Mantar, has 19 instruments for measuring the position and distance of extraterrestrial bodies. These instruments are essentially stone structures with intriguing geometric shapes.

Within the Jantar Mantar observatory lies the massive Virat Samrat Yantra. This 27-meter-long sundial is known as the world's tallest. The Samrat Yantra, which translates to "superior instrument," is an equinoctial sundial that measures time to the second.

It is known as the small Samraat Yantra because it is small and can calculate time to an accuracy of twenty seconds. The ramp of this sundial points towards the North Pole, which makes it easy to calculate the position of the ramp's shadow on the fine divisions of the carved scale. Yantra's triangular wall casts a shadow that indicates the time in the local area.

Ram Yantra calculates the elevation and azimuth of the Sun and planets. Ram Yantra's instrument consists of two tube-shaped structures open to the sky. Each design has a pole of equal height at its Centre. Inside the walls of these formats are scales indicating angles of altitude, and there are inscriptions indicating the altitude and azimuth of extraterrestrial bodies.

Jaya Prakash Yantra is another major attraction at Jaipur's Jantar Mantar. This yantra consists of two hemispherical bowls with graded marble slabs that resemble sundials. The inverted image of the sky falls on the slabs, and the movement of the inverted shadows aids in determining the elevation, azimuth, hour angles, and exact position of heavenly bodies.

The chakra yantra, Jantar Mantar, and Jaipur is a ring instrument which calculates the coordinates and the hour angle of the Sun. It uses the gnomon's four semicircular arcs and four declinations that daily calculations are possible.

Digamsa is another must-see instrument at Jantar Mantar. Digamsa is a pillar of two concentric outer circles that calculates sunrises and sunsets.

Nadivalaya depicts the Earth's two hemispheres as a pair of circular plates facing north and south. The slope of the plate's wall ensures that the instrument is always parallel to the Earth's equatorial plane.

If you skip Karnti Vratya, your Jantar Mantar excursion in Jaipur will be incomplete. Karnti Vratya is a specialized instrument used to determine the solar sign of the Sun during the day.

What are the best places to visit near Jantar Mantar in Jaipur?

The Jantar Mantar in Jaipur is just one of the many things to see around the city. Nearby magnificent spots are as below.

Q1. Why is Jaipur known as the

A1. The city of Jaipur is known as the Pink City because Maharaja Ram Singh of Jaipur had the entire city painted pink to welcome the Prince of Wales and Queen Victoria. As a symbol of hospitality, pink was the colour of choice for their 1876 tour of India. During the reign of Lord Albert, Jaipur was dubbed the Pink City.

A2. The Jantar Mantar in Jaipur is a stone sundial used for astronomical data collection. The sun's position and the direction of the shadows are prime factors in how the building depicts time.