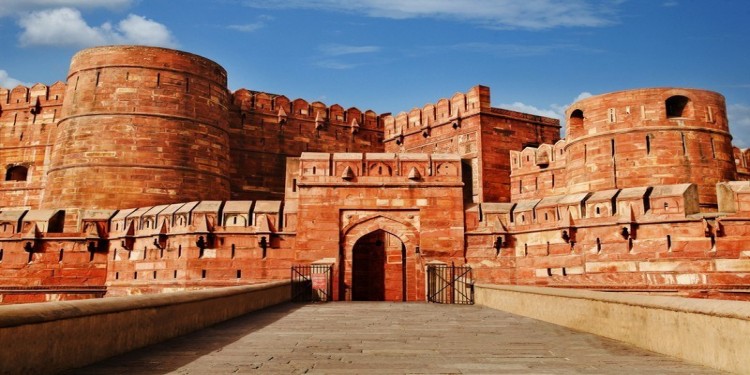 The Red Fort began its life in the 10th century as a simple mud and brick fortress along the banks of the Yamuna river. Under Akbar (1564-1570s) of the Mughal dynasty it was rebuilt along the lines of its predecessor, which accounts for its irregular outer walls. Originally intended as a fortress, the site was partially converted into a palace during the reign of Shah Jahan, who lived in the fortress and died there - a prisoner of his own son.

The residential and defensive portions of the fortress can be described separately. The outer walls, built during Akbar's time, are penetrated by two gates, called the Amar Singh and the Delhi gate respectively. The Delhi gate, to the west, was originally the main entrance although the southern gate, the Amar Singh, is used today. Both gates are sheathed in red sandstone and consist of an enormous facade flanked by twin towers. Entry is on the diagonal, and to foil invaders, visitors were originally forced to negotiate several right-angled turns before reaching the gate.

The interior of the fortress is largely empty but for a row of residential dwellings facing the river. Built during Shah Jahan's time and after, these luxurious structures drew the resources of an entire empire and were worked on by craftsman of many different nationalities. The earliest of these dwellings, the Jahangiri Mahal, was built by Akbar as a women's quarters. It is predominantly Hindu in character and was probably inspired by the Gwalior Man Mandir, a palace built earlier in the century.