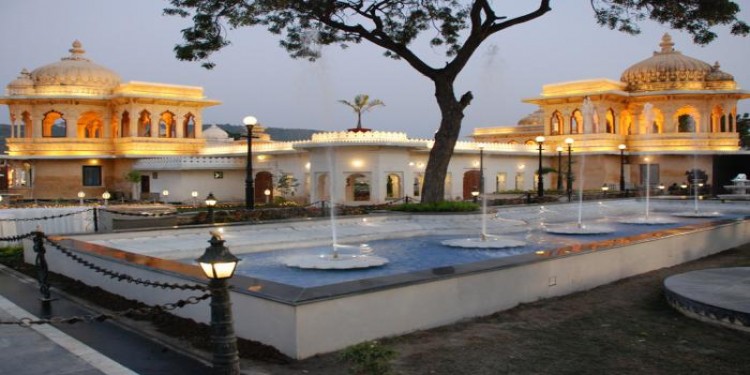 Udaipur City Tour Package For 1 Day By Taxi
Morning visit of the Bagore –Ki - Haveli  with Gangaur Gath, Jagdhish Temple, City Palace
Return to hotel for refreshing and relaxation.
Afternoon lake Pichola lake boat ride with visit of the Jagmandir
dinner at Ambrai Haveli with view over the City Palace; please reserve table by the lake!

If Lucknow is called “the city of palaces’ then Udaipur, in Rajasthan, is known as “the city of lake” all over India. It is often termed as a very romantic city, owing to the presence of so many lakes and such beauty. Udaipur city tour will show you large looming fort, beautiful lakes and the rich cultural heritage. Udaipur tour in Rajasthan will portray city’s amazing historical background and for people who love history, this place is a must visit! There are plenty of spots of tourist attractions that are a part of Udaipur sightseeing plans. Let’s find out top 5 Udaipur sightseeing spots.

The City Palace is probably the biggest attraction in Udaipur. It was built by Maharana Udai Mirza Singh in 1559. European, Chinese and medieval architecture blended to make this palace a sight to behold. This palace holds 11 more palaces which are equally exquisite and magnificent. All these palaces were built by various rulers. When you enter this palace, you must brace yourself to be spellbound by magnificent gardens, sprawling courtyards and rooms that could fit 10 other rooms in them! This palace is used for several destination weddings too and film-shootings.

Situated on the magnificent Lake Pichhola, the Lake Palace is a specimen of architectural wonder. The best feature of this palace is that it is situated on the island of Jag Niwas on Lake Pichola. Maharana Jagat Singh II had built it in the year 1746. This has now been converted into the Taj Luxury Palace and is used for luxury weddings and film-shoots. You can take a boat ride on Lake Pichhola. You can visit the Jagat Mandir and the Fatehsagar Lake nearby. The palace is open to visitors for a better part of the day.

This breathtaking Haveli, meaning Fort, was built in the 18th Century by Chief Minister of Mewar, which later became the residence of Maharana Shakti Singh of Bagore in 1878. Representing the true culture of Mewar, this Haveli has 100 rooms and is stuffed with Rajput heritage artifacts. The theatre show within the Haveli premises is really the icing on the cake!

During one of the many frictions between the Mughals and the Rajputs, Mughal Emperor Shah Jahan was said to taken refuge in this palace. Lake Garden Palace or JagMandir is said to have served as an inspiration to the iconic Taj Mahal. However, this palace also portrays the ties of friendship between the Mughals and the Rajputs. The food at the Darikhana restaurant is too tasty to miss. Also, do visit the flower garden.

As a gift to his queen and her companions, Maharana Sangram Singh II had built the “Saheliyon ki Bari”. This is also an architectural wonder and it is where the queen, with her 48 maids, rested, played and lived. This is a very quiet place, far away from the din and bustle of the city. The gardens are wonderful to roam around and the multi-cuisine restaurant called 1559 AD is truly delicious!